Building for EUMETSAT in Darmstadt

EUMETSAT (European Organization for the Exploitation of Meteorological Satellites), established in 1986 with headquarters in Darmstadt, is an intergovernmental organization of in total 26 member states and 5 associate countries, which operates on the basis of an international convention. These countries fund the organization and are also the major users of EUMETSAT products for weather, climate and environment.

Because of the continuously expanding responsibilities of EUMETSAT, one of the world's leading satellite organizations for meteorological, environmental and climate monitoring, the existing space at the site for accommodations and provision of the staff are no longer sufficient. That's why the construction of a new office building with company restaurant became necessary for the long-term use of the EUMETSAT site in Darmstadt.

On 23 December 2013, the turnkey construction department was awarded the contract for the construction of an office building with approximately 160 workspaces and a company restaurant with an attached cafeteria to serve an average of 410 meals a day. The launch of the structural works for the building with an overall height of 25 m was in January 2014. The six-story building shell, with dimensions of 60 m x 15 m in the basement and 40 m x 35 m on the ground floor and four upper floors, went up in just six months.

The closing the building shell began with the concreting of the last ceiling. The outside facade was an interesting challenge. The building shell of the "floating" office block was fitted with a thermal insulation composite system. In addition, large windows cover the east, south and north sides. A floor-to-ceiling aluminum window facade with external sun protection was used on the southern facade. Similarly, a floor to ceiling punch-window facade was built on the east and north sides. Exposed metal panels were then installed between the rows of windows. Solar protection glazing was used on the eastern facade. A thermally insulated aluminum sheet metal facade encloses the kitchen area on the ground floor; the adjoining dining room is flooded with light by a post-and-beam facade.

This especially highlights the gold-colored aluminum mesh ceiling in the exterior and interior of the dining room and gives a coherent overall picture with the acoustic cladding made of wood and the quality Corian front of the food counter. 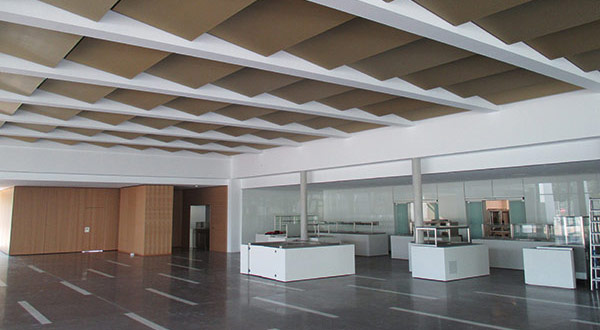 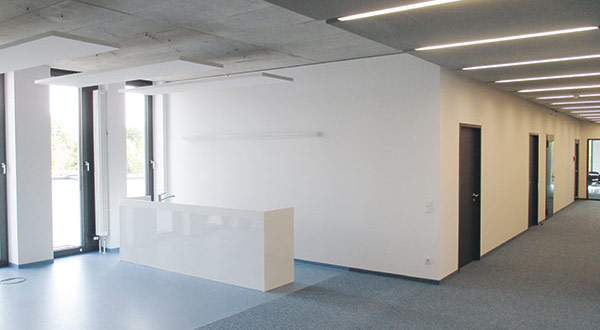 The individual offices are supplied with the necessary equipment for daily operations via the cavity floor. Floating ceiling panels under the exposed concrete ceilings provide good acoustics in the offices.  The hallways on the office floors provide office users the opportunity to exchange information with one another; this is further enhanced by an integrated kitchenette. The ventilation systems in the hallways are installed behind a transparent expanded metal ceiling so they remain visible to the user.

The office floors are cooled via concrete core activation, which is particularly effective through the exposed concrete ceilings. The cooling of the company restaurant and the cafeteria is ensured across the floor. Ventilation takes place via linear diffusers in the suspended ceiling, through which air is introduced. The building's heat supply is ensured by the local utility's district heating network and four air-cooled heat pumps. The pumps were placed in the equipment room on the 4th floor and designed so that they also cover the entire cooling demand. Just like the cooling of the office floors, the basic heating load is effected via the concrete core activation of the exposed concrete ceilings. In addition, the offices are equipped with static radiators. 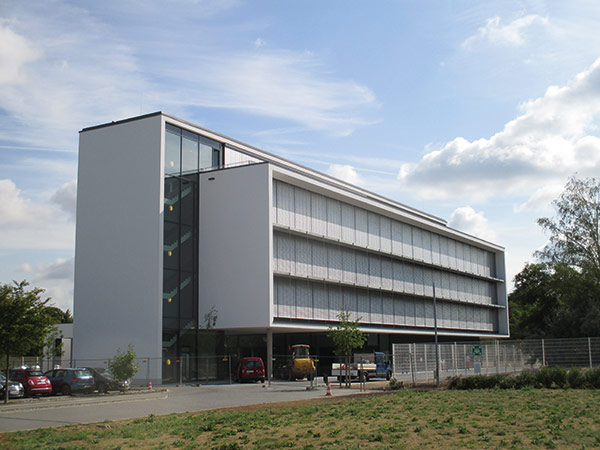 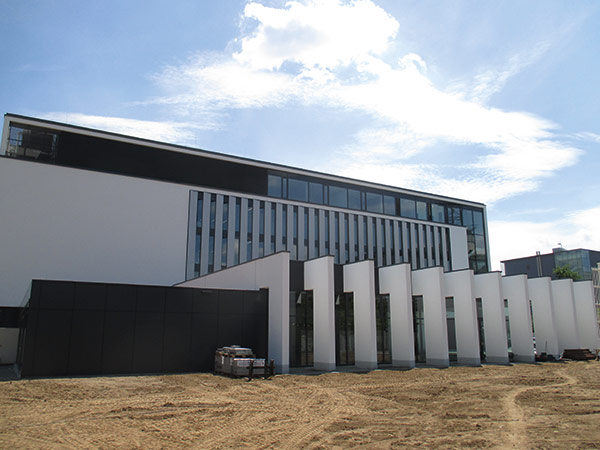 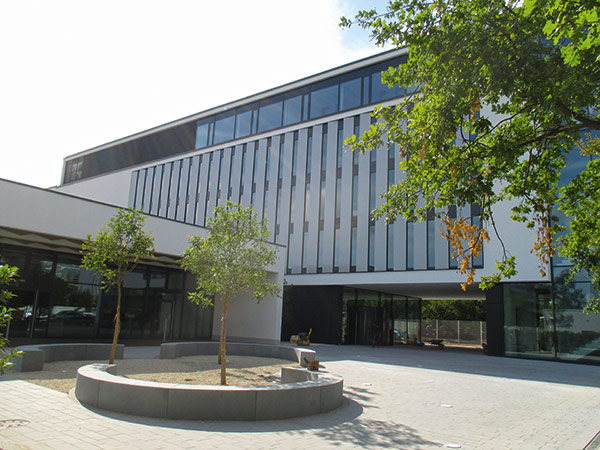 The spacious outdoor area around the office building joins directly to the existing EUMETSAT grounds with access and exit roads and existing rows of oak trees. The existing design elements such as stone walkways/channels and a row of trees have been integrated by the road construction team into the new design of the square. Paving stones were produced specifically for this building and they were expertly installed to the axis and vanishing points specified by the architect in close coordination with planning. The building was handed over on schedule thanks to the successful cooperation between EUMETSAT and LEONHARD WEISS.

In November 2010, the turnkey construction team was awarded the contract for the construction of the data center. The launch of the building shell was in January 2011 after clarification of land titles. Within six months, the six-story building shell went up with dimensions of 40 m x 25 m in the basement and 25 m x 25 m from the ground floor to the fourth floor. This meant that the challenging finishing work could already begin in the middle of June.

The construction management team at LEONHARD WEISS was faced with an exciting challenge not only because of the complicated electrical, cooling and fire protection systems, but also because the complex outer shell of the building.  In addition to an ordinary thermal insulation plaster system, a second facade was built from a stainless steel mesh at a distance of one meter. This serves the architectural requirements on the one hand and lightning conduction on the other (Faraday cage).

In addition, LED lighting was installed in the space between the facade and the building, which also sets the stage for the building at night. A lot of meetings with the planners and the contractors were needed to bring the architecture and the structure into harmony. Another difficulty that had to be overcome was inserting the staircase facade into the stainless steel mesh. After the last steel rail hung on the crane in January 2012, everyone knew that the numerous deadlines had paid off. Last but not least, the data center was connected to the existing EUMETSAT buildings by a bridge.

In addition to the numerous finishing trades such as drywall, expanded metal, double floor, natural stone and paint work, the building services presented yet another challenge: For safety reasons, various scenarios had to be played out to make sure that the power supply would be available around the clock, 365 days a year. For redundant medium voltage supply of the various substations, it was also necessary to install two emergency power systems as well as two uninterruptible power supply systems.

Redundant systems were also used for cooling the server rooms in order to ensure continuous cooling of the rooms in the event of a failure of the cooling system. The auxiliary rooms and rooms with high heat generation can also be cooled down to the required temperature via this cooling system. In the colder months of the year, the waste heat from the server is processed in combination with heat recovery of the heating system to heat the offices and workspaces. In addition to the high safety precautions, such as access to the individual rooms being controlled via biometric fingerprint and video surveillance on all floors, a CO2 system was also put in place for fire-fighting in the server rooms. Thanks to the timely handover, the dedication was successfully held in April 2012 with the participation of representatives from politics, radio and television. 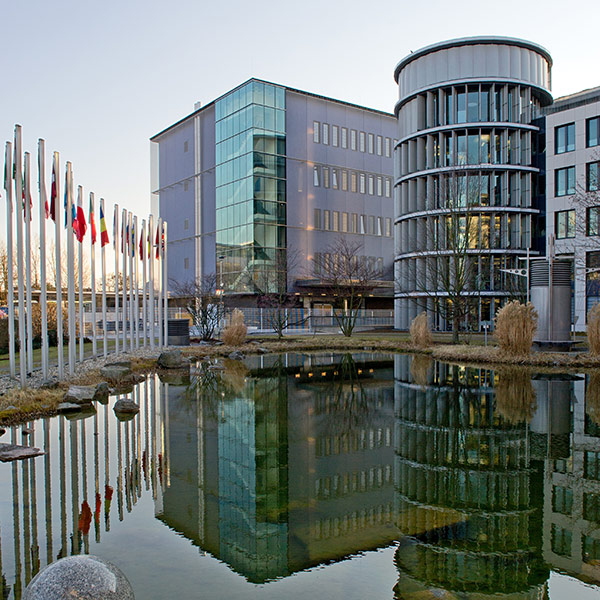 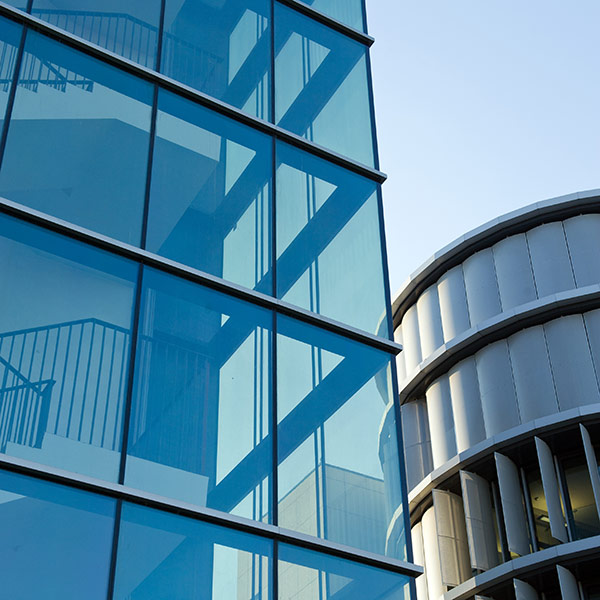 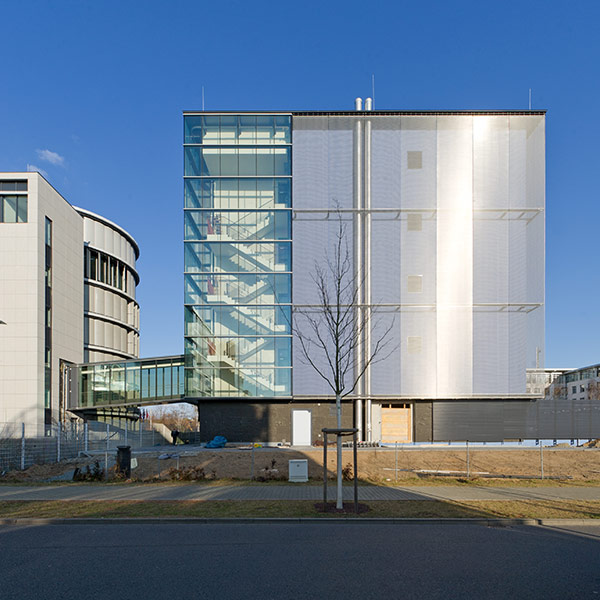