Construction between Würzburg and Frankfurt (Germany)

Extensive construction measures were carried out in the Würzburg area as part of the six-lane expansion of the A 3, between the Randersacker and Heidingsfeld junctions. LEONHARD WEISS was awarded the contract to construct the Katzenberg tunnel as a noise abatement measure for the adjacent residential area Heuchelhof. Structural Engineering was assigned the implementation based on the offer from LEONHARD WEISS. In this case, the road and earthworks to be implemented will be completed by the Road Construction team.

In its basic structure, the tunnel is defined by a two-cell frame. It consists of 57 blocks, each with a block length of 10 meters. The production is carried out as "cut-and-cover construction." After it is completed, the construction will be covered so that it will be available for paths, green areas, and sports and leisure facilities. The roadway will be lowered up to nine meters compared with the present motorway route so that the tunnel construction modifies the existing site situation as little as possible.

The construction process is divided into two main phases and a follow-up phase. The north tube including interior construction and operational buildings are constructed in the first phase (September 2014 to December 2016). The route of the north tube runs following the soon-to-be-constructed Heidingsfeld viaduct for the first 20 blocks north of the existing road. In the further course this cuts into the current direction of travel toward Frankfurt. It was therefore necessary to reroute the overall traffic to the south. The road construction team created a detour route on the south side of the existing route for this purpose. This enabled the traffic from the original direction of travel toward Frankfurt to be completely rerouted toward Nuremberg.

In addition, the road construction team's task was to prepare the necessary sub-grade for the tunnel construction. Because of the site circumstances, a preliminary bed and enlargement of the slope were needed for this in some areas, as well as considerable excavation for the existing road areas. The existing highway passage also had to be removed in sections along Unterer Kaulweg.

The southern tube, including interior finishing, will be constructed in the second phase (July 2017-September 2019) after relocation of all of the motorway traffic into the north tube. The temporary openings for the escape and rescue doors in the northern wall will be closed off again in the follow-up phase (October 2019). 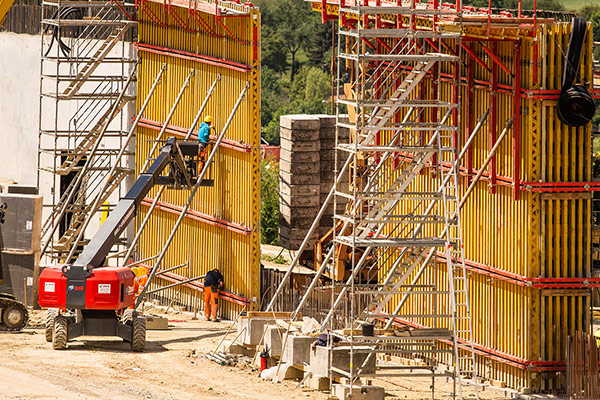 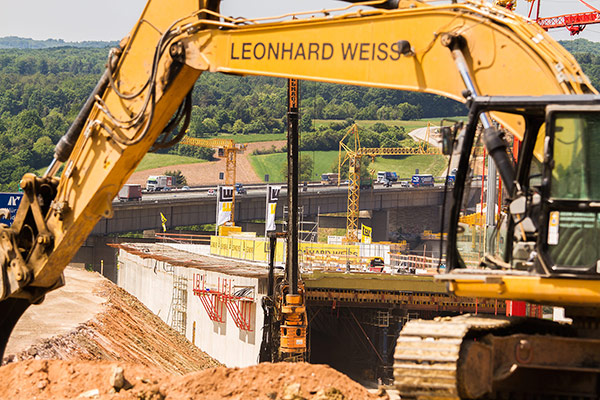 The construction of the tunnel of walls and ceiling takes advantage of a technological innovation using concrete with polypropylene fibers mixed in. These fibers are six millimeters long and two microns thick and are used for fire prevention. The LEONHARD WEISS procurement team was prepared for the new demands and requirements of the building materials technology in the negotiation and award of these deliverables. In the event of fire, the fibers serve to prevent the concrete surface from flaking and thus a failure of the entire construction. This construction replaces the currently established practice of inserting a galvanized N94 mat in the ceiling area. In the event of fire, the functional principle is based on the PP fibers melting. This results in both micro- and macro-channels in the concrete structure. The steam pressure energy that arises from the bound water can escape through these channels. New concrete formulations had to be developed for this in coordination with the concrete supplier and the MFPA Leipzig, which had to be proved by means of processing tests on samples before their first use in the actual tunnel. The current experience from the construction site shows that the concrete needs increased monitoring in its production, processing and the required testing documentation. 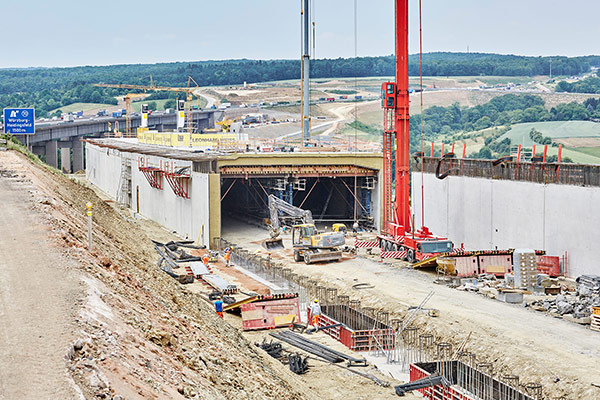 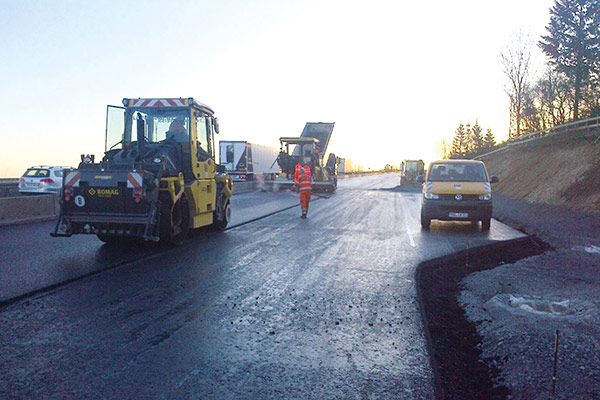 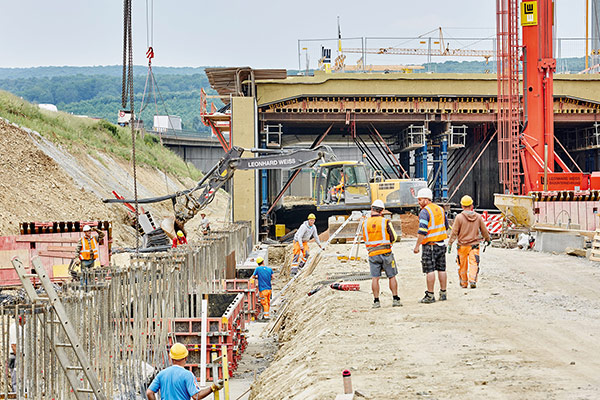 STRUCTURAL WORK FOR THE TUNNEL

The structure is set on foundation piles with a diameter of 1.20 meters, which are inserted into the ground up to 20 meters deep. More than 700 large bored piles will be constructed for this project, including the piles in the area of ventilation partitions and noise barriers in extension to the portals. The pile caps are interconnected by a pile cap beam. Because of the static need for a gripping action of the pile in the tunnel support structure, the bored pile reinforcement was constructed in the rising wall panels up to a length of nearly two meters. The pile cap beam supports the 1.20 meters thick and up to almost nine meter high tunnel walls. The tunnel ceiling closes off the construction; it is 1.80 meters thick at the support points on the walls and tapers at mid-span to a thickness of 1.20 meters.

The wall form work is a special form work that was developed in coordination with our form work technology department and the PERI company. A form work shell made of solid plastic plates should ensure that the wall form work can be used without a form work shell change for the entire tunnel construction. The large-format recess formers for the tunnel equipment (fans, electrical lines and lighting, safety technology) were realized by means of prefabricated parts made of fiber cement. Chloride monitoring is used within the walls, which provides information about the useful service life with respect to chloride ingress. Two form work carriages are used for the creation of the ceiling. These work in back-step sequence. The first carriage only creates every other ceiling; then the second carriage enters into the resulting gaps and closes them. Challenges in the planning were, first, the consideration of the required longitudinal and transverse inclinations, and secondly, the widening of the tunnel in an easterly direction. The form work carriage had to be designed with a variable width for this purpose. This could be solved by each form work carriage being comprised of two individual carriages, which could be moved either together or individually. The basic premise of this solution is that the two carriages are always drawn near the tunnel walls. The resulting gap must then be formed out locally. At peak periods our site personnel was able to prepare four wall cycles and two ceiling cycles in a week. The works are on schedule as of today's date, so it can be assumed that LEONHARD WEISS will complete the project on time.