The rail line Stuttgart-Mannheim is approximately 99 kilometres long and one of the first high-speed rail lines in Germany that is authorised for up to 280 km/h. It was built between 1976 and 1991 and put into operation in 1991. Due to the high speed the wear of rails, but also of sleepers and of the underground structure is much higher than in normal rail traffic. After 25 years it was thus time to renovate and replace individual points and rail sections – and everything had to be finished during 664 hours complete shutdown of the rails. 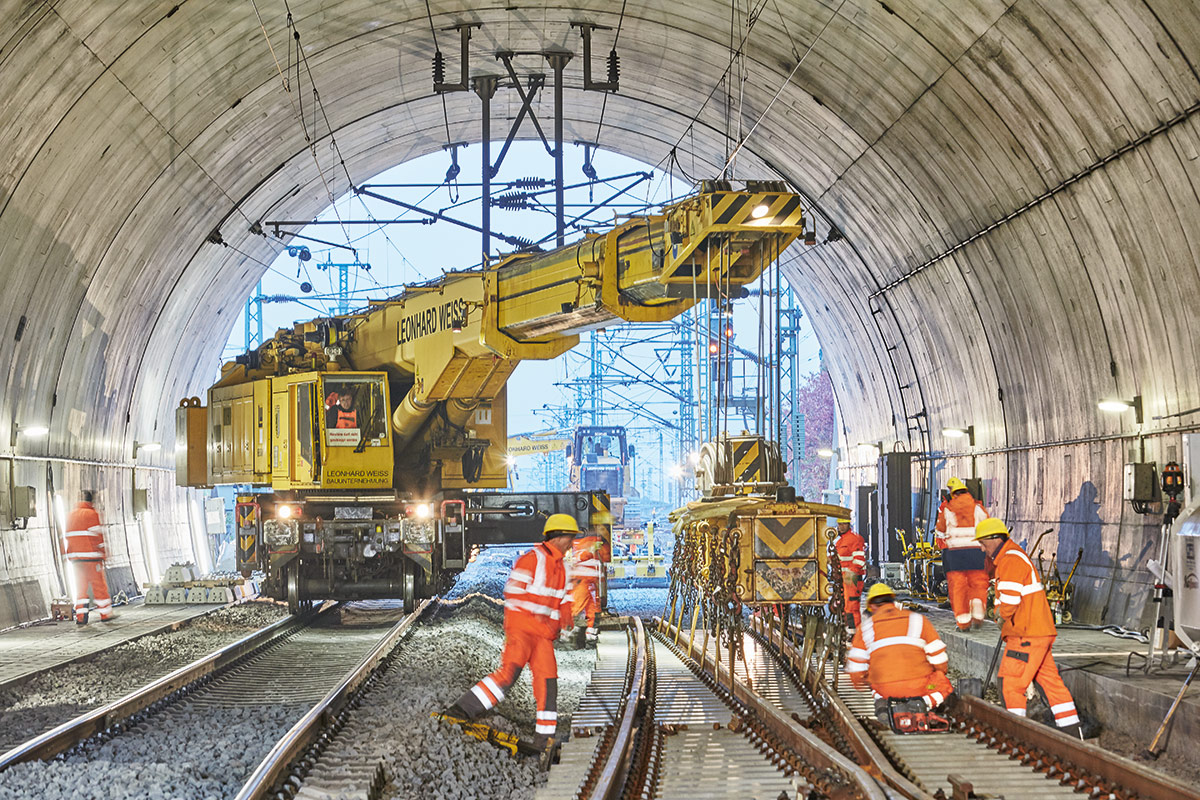 The invitation to tender for the renovation measures was already published in January 2015. LEONHARD WEISS was awarded the contract for the construction works on the high-speed rail line Suttgart-Mannheim on 16th June 2015. Track Construction Göppingen/Munich planned and executed the works with the support of Track Construction Satteldorf/Nuremberg. The large contract included the renovation of 30 points, 6 rail expansion joints, 3 km ballast cleaning by means of machines and track renewal altogether.

The expansive and extraordinary construction project was carried out in a very short period of time by the construction site team lead by the construction managers Josef Haile and Oliver Stern with the site managers Matthias Hartmann, Steffen Waibel and Edgar Baumann, the estimators Rainer Lenz and Florian Stingl, contract manager Seckin Balci and work preparers Markus Fuhrmann, Andy Parschau and Thomas Schmelcher, as well as the ground surveyors Heike Welz and Kurz Wuckelt. Detlef Heink, Thomas Theuerl and Niklas Schwilk were responsible for all logistics at the construction site. The billing was carried out by Thomas Zabojszcz.

After the thorough work preparation with numerous meetings of the track construction departments involved, the technical department and the department superstructure welding, the time schedule was defined to the minute. One of the greatest difficulties was the continuous trafficability of one track, as our construction logistics department had to deliver everything on this construction site per rail vehicle. In order to be able to do this, an operation sequencing plan had to be made up, taking into account every single logistics run. Only by means of this plan a smooth operation of crane, tamping machine, maintenance train and the numerous road rail excavators could by guaranteed. In the end, the gangs from Track Construction Göppingen/Munich and Track Construction Satteldorf/Nuremberg were planned for the individual construction sections. As 14 points were situated in a tunnel, a ventilation concept had to be developed and put into practice for these works. 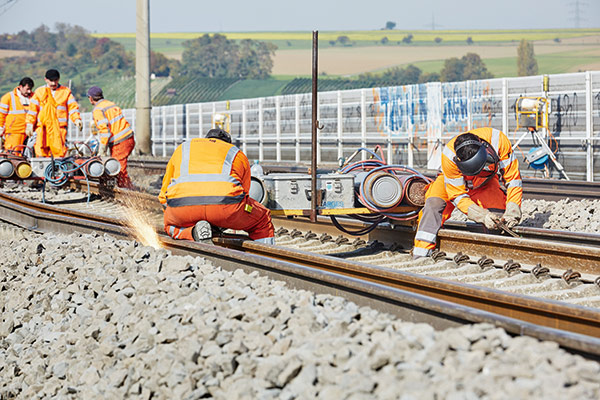 FIRE AT THE POINTS FACTORY OF DB NETZ AG IN WITTEN

After work preparation was finished, we were notified on 23rd July 2015 that a production hall at the point factory Witten was burning. At that moment we did not yet realise, what effects this fire would have for us on our construction site. One week after that we were invited for an emergency meeting at DB Netz AG in Karlsruhe. It is important to know that for construction sites of DB Netz AG the construction material, like for example ballast, sleepers, rails, as well as points are delivered by the customer. During this meeting we were thus informed that a total of eight points and six rail expansion joints would not be produced in time. Due to the fire and the re-planning of delivery dates of points the master plan was completely scrambled. We were obliged to develop a new time schedule, taking into account the omitted performances. After re-planning was terminated, the first works could begin on 17th August 2015.

The first shutdown state included the renewal of 14 points. The section between Vaihingen/Enz and Kraichtal was completely shut down for 336 hours to do this. During this time, the gangs of Track Construction were busy all around the clock, in order to replace the 14 points, four of which were exceptional of the form EW 60 – 2500 with 30 tons own weight each, as well as approximately 8,000 tons of old ballast. This was only possible thanks to the intensive performance of our machine operators, who proved their efficiency with seven road rail excavators and one loading caterpillar. But also the colleagues in the field Track Construction Engineering carried out their work drawing on their experience and transported the pre-assembled points precisely to the planned installation sites by means of the track construction crane KRC 1200. After the professional fitting and installation by our track construction employees, the specialists of the tamping machine could align the points to the correct height and direction. After the points were situated at the correct site to the millimetre, our welders marched up, in order to weld a total of 274 rail joints. 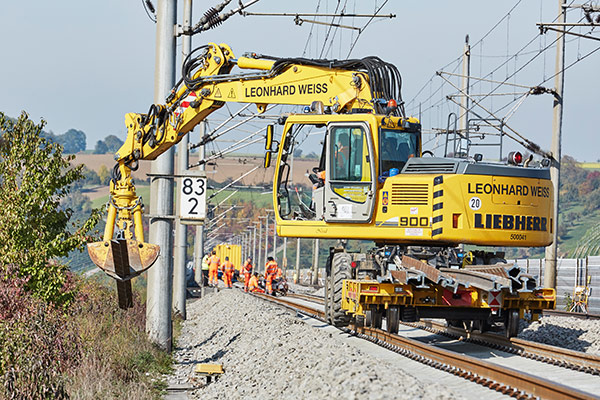 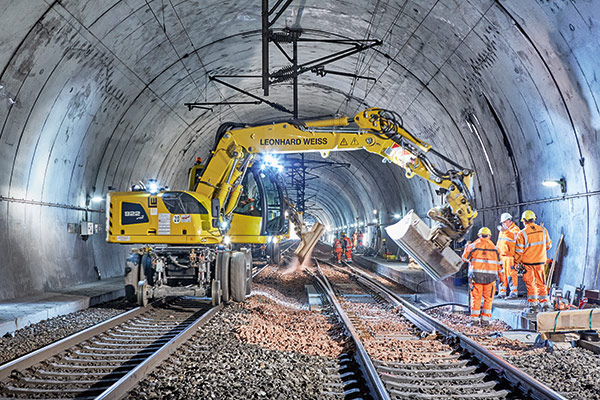 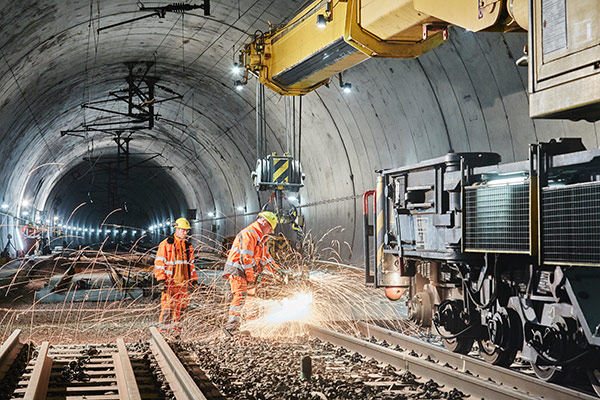 COMPLETE AND PARTIAL SHUTDOWN BETWEEN VAIHINGEN/ ENZ AND SCHWIEBERDINGEN

During the second shutdown stage, six points of the type 1200 were renewed in the Markstein tunnel in Vaihingen/Enz during 216 hours complete shutdown. In advance the ballast on the Enztal bridge was cleaned, processed and complemented, on a section of 3 km, during a shutdown of one half of the track. Our track construction train UM 2 “Schwobapfeil“ replaced the 3 km of track during the subsequent complete shutdown. For the renewal of the points in Vaihingen four pre-assembled points were transported from the assembly site in Kraichtal to the site of installation by rail vehicle. Two further points were dismounted to a large part, as the substructure needed to be improved by means of a formation protection layer. After that, the old points were re-installed, as the newly ordered points had been destroyed by the fire in Witten.

COMPLETE SHUTDOWN OF THE NEBENWEGTUNNEL

During the third shutdown stage four points of the size 760 were exchanged in the Nebenweg tunnel on the section from Vaihingen/Enz to Bietigheim-Bissingen. This was carried out during two week-ends with a 56 hour shutdown interval each. The particularity of this task was that the points were interlaced with each other. Therefore, one pair of points had to be renewed cohesively. This made logistics more complicated, as no track was continuously trafficable during this renewal process.

On 12th October 2015 DB Netz AG was invited for a press meeting on the Enztal bridge, in order to report the progress of the construction project to the public. Present at this press meeting were, among others, Dr. Roland Bosch, Chairman of Production of DB Netz AG, our Managing Director Track Infrastructure Construction Marcus Herwarth, our Technical Director Track Construction Xaver Eiglmaier and Division Manager Jochen Wittlinger. The current state of the construction project was reported and afterwards the construction site was inspected by boarding our construction train 2 “Schwobapfeil“. The Management of DB Netz AG could leave the construction site with conviction and a good conscience knowing about the strength of LEONHARD WEISS. There are professionals at work! In November 2015 the use of the track could be transferred to DB Netz AG after an on-schedule approval without defects. After the prescribed load of the points, they could be tamped during individual night shifts during the period from 1st December 2015 until 31st January 2016 and the blades and frogs of the points could be burred. In autumn 2016 the six omitted rail expansion joints on the Enztal bridge and Glems bridge are to be renewed. The renewal of the remaining eight points is planned for autumn 2017. Afterwards, DB Netz AG thanked our Managing Director Marcus Herwarth in writing for the good co-operation as partners during this construction project. LEONHARD WEISS was thus able to prove once more that one could “experience the joy of construction“ thanks to excellent quality and professional project execution.